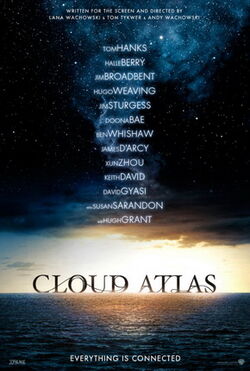 Cloud Atlas is an epic adventure-drama film written and directed by The Wachowskis (Lana and Lilly, known as The Wachowski Sisters) and Tom Tykwer. Based on the 2004 novel of the same name by David Mitchell, the film boasts a large ensemble cast - necessary to cover the film's multiple storylines. Production began in September of 2011 at Studio Babelsberg in Germany, and the film was released on October 26, 2012

"Cloud Atlas explores how the actions and consequences of individual lives impact one another throughout the past, the present and the future. Action, mystery and romance weave dramatically through the story as one soul is shaped from a killer into a hero and a single act of kindness ripples across centuries to inspire a revolution in the distant future." [1]

The film consists of six interrelated and interwoven stories that take the viewer from the South Pacific in the nineteenth century to a distant, post-apocalyptic future. Unlike the original novel, the film is structured, according to novelist David Mitchell, "as a sort of pointillist mosaic: We stay in each of the six worlds just long enough for the hook to be sunk in, and from then on the film darts from world to world at the speed of a plate-spinner, revisiting each narrative for long enough to propel it forward." [2]

The six stories are:

A seventh time period, about 25 years after the Hawaiian one, is featured in the film's prologue and epilogue. In the prologue, a lone Zachry delivers a monologue, and his location is not revealed. In the epilogue, Zachry is revealed to have been telling these stories to his numerous grandchildren, with two moons in the night sky and Earth visible as a pale blue dot. Meronym emerges from their home and they embrace. [3]

Community content is available under CC-BY-SA unless otherwise noted.
Advertisement