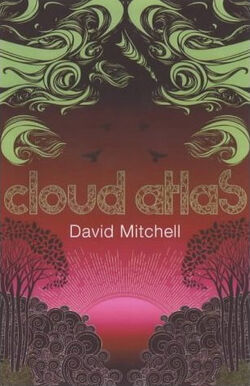 The Ghastly Ordeal of Timothy Cavendish - Chapters 4 and 8

The first "Timothy Cavendish" chapter starts with Mr. Cavendish relating an incident that occurred six years prior to the telling. It seems he challenged three, rough teenage girls for littering on the streets of London and was knocked down and robbed of his watch for his efforts. He didn't report the crime, since he'd have to admit that he was bested by three teenage girls.

Mr. Cavendish is the owner of a small, and largely unprofitable, vanity press. He continues his tale with the story of Dermot "Duster" Hoggins, the author of "Knuckle Sandwich" and one of Cavendish's authors. It is the night of an awards presentation, and the restaurant is filled with authors, editors, and book critics. Towards the end of the evening, Hoggins finds Cavendish, nursing his drunkenness on the restaurant's rooftop patio. Hoggins is upset that one of the critics there, Mr. Felix Finch, panned his book, which was Hoggins' only review.

Hoggins begins making a scene, egging on the crowd to congratulate Finch. When the hapless critic inquires as to the prize (critics all love freebies), Hoggins tells him it's a free flight and proceeds to fling him off of the twelfth floor balcony.

After that incident, Hoggins' books sell off the shelves and make Cavendish quite a bit of money - at least until his creditors are paid. Soon, he is visited by the incarcerated author's thuggish nephews, looking for their share of the revenues. Hoggins, in his original contract, signed away all rights to the book, but the two nephews are not inclined to accept that fact. They give Cavendish one day to come up with their "share" of the book royalties.

Cavendish is desperate. He doesn't have the money to give them, even if he wanted to. After he has paid his bills and indulged himself a little, there isn't any money left. He's also "tapped out" at the bank. As a last resort, he visits his brother, Denholme, in hopes of borrowing the money. Denholme is exasperated with Cavendish, having lent him money on more than one occasion. He, does, however, offer him a "place who owes him [Denholme] a favor," where Cavendish can lie low for awhile.

The destination is north of London near Hull on the north-east coast of England, and Cavendish has an awful time getting there. His trains are delayed and mis-connected and he is robbed of his money somewhere en route. To occupy himself while traveling, he takes a manuscript, "Half-Lives: The First Luisa Rey Mystery," which has been sent him on speculation and begins to read it. The next day, he finally makes it to "Aurora House" late in the evening.

Exhausted, he signs the papers thrust at him and is shown his room. Cavendish is too exhausted to do anything but sleep.

The following morning, Cavendish begins to investigate his surroundings. There is no phone, no sharp edges, and all of the other guests are at least seventy years old. Aurora House is a nursing home for the elderly. Annoyed with his brother's idea of a joke, Cavendish attempts to leave the facility. It seems, however, that the papers he signed the previous night were admission papers and he will not be allowed to leave.

He breaks the lock on his room door and strides out onto the grounds in hopes of making his escape. In moments, however, he is tackled by the ogre-like groundskeeper, Mr. Withers. What's worse: once inside, he is caned by the stoic and cheerless head nurse, Nurse Noakes.

Cavendish is visited by a few of the other residents who try to tell him Aurora House is not so bad, but he is determined to get out of there. He plots his next strategy, but over dinner, his fork falls from his hand in an apparent stroke.

The final portion of the "Timothy Cavendish" story starts with Cavendish gradually recovering his strength, his speech, and his motor skills following his apparent stroke. In the month that follows, he struggles to regain his memory and his other faculties. When his memory returns, he realizes anew that he is a captive at Aurora House.

While Cavendish awaits the return of his strength and tries to figure out how to escape, he rereads "Half Lives: the First Luisa Rey Mystery," deciding it might make a good thriller after all. He longs for the second half of the mystery, but has left the cover letter and contact information in his office in London.

Cavendish befriends a couple of the other residents of Aurora House - Ernie Blacksmith, Veronica Costello and the feeble-minded Mister Meeks. They invite him to their hideout in the boiler room, where they share purloined whiskey and stories each afternoon. They also share the ins and outs of Aurora House with Cavendish and discuss, in broad terms, the possibility of escape.

One night, Cavendish sneaks out of his room and finds a telephone in an unlocked office. He manages to dial his brother's house and gets his sister-in-law, Georgette. His brother, Denholme, has drowned in his fish pond, and Georgette seems to have lost her mind. Before he can learn any more, he is found by Withers, the Aurora House maintenance man, and is returned unceremoniously to his room.

Back in the boiler room, Ernie scolds Cavendish, saying that he uses the phone regularly to check sports scores and now it will be locked up. What's more: he warns Cavendish to be careful or they will put something in his food, like they did the last time when he had the stroke.

At Christmas, Cavendish tries to get the pastor to post a letter for him, to his former secretary, requesting his rescue. Cavendish dreams of the day very soon that he will be free of Aurora House. The next day, however, he finds his letter, torn to bits inside a festive Christmas stocking, hung in his room by the sadistic Nurse Noakes.

For days, Cavendish is too depressed to meet his friends in the boiler room. Finally, when he joins them, he tells of his desperation to escape Aurora House. Ernie and Veronica agree to help him if he takes them with him. They form an outlandish plan, one that just might work.

On the day of their escape, the group lures the rich son of a patient to Aurora House (on a stolen cell phone) with the story that his mother has regained her senses and wants to tell him where she has hidden her money. The greedy son agrees and hurries to Aurora House. To get Nurse Noakes out of the way, they tell her that Cavendish has died in his room. When she goes to check, they lock her in the room.

To complete the farce, the group hurries the arriving son to his mother's room and takes off in his car. They are chased from the grounds, but make a clean getaway, with much rejoicing and giggling. Safely away from Aurora House, they stop at a pub and are enjoying a drink when Cavendish realizes that he has left their escape route map on his bed with Nurse Noakes. He advises the group that they better leave quickly.

On cue, Withers bursts through the door, intent on escorting the inmates back to captivity. Before they can, however, Mister Meeks jumps on the bar and implores the working class bar patrons to help them keep their freedom. The rowdy bar crowd goes after Withers and his bunch and eventually they reluctantly leave. Thus ends "The Ghastly Ordeal of Timothy Cavendish."

Cavendish decides to stay out of hectic London and moves into a boarding house in Edinburgh. He contacts Mrs. Latham, his secretary, who has managed to appease the Hoggins nephews. "Knuckle Sandwich" has sold to a movie studio and there is enough money for everyone. He contacts the author of "Luisa Rey," reads the second portion, and is preparing to have the story published.

Retrieved from "https://cloudatlas.fandom.com/wiki/The_Ghastly_Ordeal_of_Timothy_Cavendish?oldid=5842"
Community content is available under CC-BY-SA unless otherwise noted.